For more than one month I have been living in Semporna, in Sabah, where I have visited remote islands and several Sama Dilaut (Bajau Laut) communities. I have talked to sea nomads, been diving, attained a wedding and continued to learn the basics of Sinama.

One thing that surprises me is the  life pulse and energy I always feel when I visit a Sama community. Even if I go to Semporna or remote parts of Mindanao I always get the same feeling.

In Semporna hundreds of house boats have their moorage, either close to one of the many islands in the region or simply in Semporna town close to the Sama Dilaut communities Kampong Halo and Bangau Bangau. They make their living entirely from the sea: they are net fishing, hook-fishing, spear gun fishing and dive for sea cucumber and pearls. During low tide they also go along the shallow corals and collect sea shells. It is fascinating to see the water adaptation of the Sama – an adaptation that starts in early age. A child learns to swim when it is 2-3 years old, it learns how to paddle a boat at five and dive at the age of six. 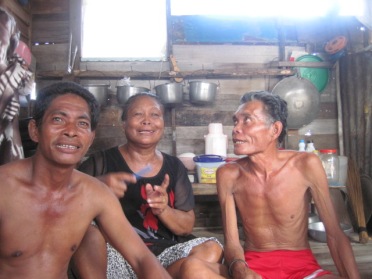 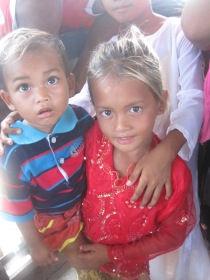 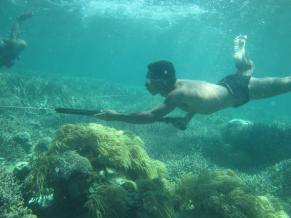 Unfortunately, some of the Sama Dilaut fishermen are also involved in dynamite fishing and compressor diving. Fish bombing is, of course, devastating for the marine life as it completely destroys the corals. But as one fisherman told me: “when I go hook fishing I must wait a long time for a catch, but if I throw a bomb I will get plenty of fish in seconds!” Of course, bomb fishing is highly illegal and leads to imprison and big fines. I met one pregnant woman with small children whose husband and oldest son had been caught bombing fish, which left the family without livelihood.

It is important to note, however, that it is unusual that boat living Sama make a living from dynamite fishing. It is much more common among more settled, house-dwelling Sama Dilaut fishermen.

Nearly all Sama Dilaut in Sabah are refugees from the Philippines. Many of them lack Identity cards and passports. A majority doesn’t even have a birth certificate. Without ID you have no right to get medical support (it costs 50 RM, approximately 17 USD without ID for a medical checkup and only 1 RM if you are a Malaysian citizen) and schooling. However, many Sama Dilaut have a “lepa passport” (a houseboat passport) authorized by the local government which gives them right to stay in the waters of Sabah.

Probably, the reason behind Sama Dilaut’s partly devastating fishing methods is linked to the fact that they are not recognized as legal – as a matter of fact many Sama Dilaut do never set their foot on land because of fear of deportation. Hence, if you are living there illegally and don’t get any support from local authorities, you might be tempted to get involved in devastating fishing practices.

When I talk to the Sama Dilaut they all tell me one thing – they are afraid of the Tausug people of the Sulu – which have ruled the area for centuries. Today many Tausug are armed and some of them have been in part of the creation of the Abu Sayyaf guerilla. For decades they have been fighting against the Philippine government in order to establish a free Muslim state in southern Philippines. Recently, a peace agreement were settled which has calmed the overall situation, but single Sama individuals are still under huge threat (see: Philippines peace deal is far from a done deal for more information). Their catch and their machines are taken under night. Young women are forced to marry which make them escape in the middle of the night. Bombs have been thrown into their houseboats.

Have they always been nomads?

It is estimated that the nomadic lifestyle of Sama Dilaut is more than 1000 years old, but I have wondered if the present day sea nomads always have been living in the boat, or if they till recently have been living in houses? During my first month of stay with Sama Dilaut I have been asking many nomads about their history.  As a matter of fact, some of the present day sea nomads have actually quite recently been living in houses in Philippines, but they resurrected their forefathers way of living when they came as refugees to Malaysia. It is still unclear how many of the nomads that have been nomads for generations, and that is one question I would like to figure out during my six month long stay in Southeast Asia.

In one week I am going to Philippines where I will visit the Sama Dilaut community in Matina Aplaya, Davao City. Here many people are living entirely on spear-gun fishing and they use no compressors and no dynamite. I am really looking forward to come back to Mindanao!