The Placenta is Thrown into the Ocean

Bajau Laut have been living in Southeast Sulawesi since the 16th century. Originally, they were involved in the spice trade, transporting lucrative spices from Moluccas to Borneo. When the Dutch colonialists changed the trade routes many Bajau Laut stayed on their houseboats made a living completely from sea harvesting. Some do still today.

ons ago, when Bajau sea nomads settled in pile houses.

In one of the villages of Buton, Lasalimu, I met Sadar, a Bajau who works for WWF in Wakatobi. His work is to persuade Bajau fishermen stop dynamite fishing. “In Wakatobi we have been quite successful but further north many Bajau use fish bombs and cyanide”.

In Wakatobi most fishermen make a living from skin diving, as compressors are illegal. “We also try to regulate how much fish they can catch a day”, Sadar told me, “it is necessary because they are fishing in Wakatobi National Park”.

Sadar also told me that it still is practice among some Bajau to throw the placenta in the ocean after giving birth. They believe that the child will protect the sea as “it is the home of their sibling”. You can read more in this article in Al Jazeera: Indonesia’s last nomadic sea gypsies  (2012-10-06). 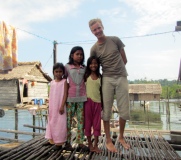 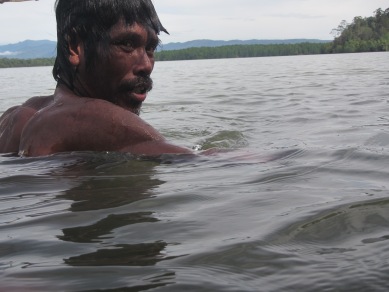 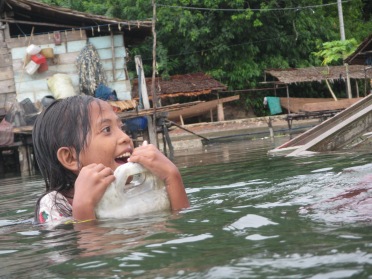 Born on the sea

After my visit in Buton I headed north to Lasolo where many Bajau Laut are living on small, isolated islands. Around these islands, many Bajau used to live on the boats till only a few years ago. More or less everyone above 10 years old were born on the sea.

The author of Outcasts of the Islands,  Sebastian Hope, visited Lasolo in the last decade and met sea nomads close to Boenaga and island of Labengke in Lasolo. But today all of them are living in houses.

In the Gulf of Togian in northern Sulawesi, however, it is still possible to find Bajau Laut who have been on the boat their entire lives.

Throughout The Coral Triangle you can find pockets of Sama communities, distinctive from the surrounding society, but speaking more or less the same language as other Sama groups living miles away.

It has been very interesting to be able to meet Sama people in Philippines, Malaysia and Indonesia and compare their dialects. As a matter of fact, there are still many similarities in their languages. For example, most words related to their maritime lifestyle are identical in all dialects I have encountered, like “amana” (spear-gun fishing) “messi” (hook-and-line fishing), “anga ringi” (netfishing), “e‘bong” (dolphin), “kalitan” (shark), “bokko´” (turtle), “gojak” (waves), “mosaj” (to paddle).

During my next Indonesian trip I would like to visit Flores, not far from Australia … probably they will speak a similar dialect here as well… But that will be explored during another journey. Now I am heading back to Semporna.