Lucy – Was She Living in a Lake Margin?

In the end of June I went to Addis Ababa, Ethiopia, were I visited the National Museum. Here the remnants of the world’s most famous fossil, Lucy, can be found. The skeleton is 40% complete and is estimated to be 3.2 million years old.

Lucy was discovered in 1974 near Hadar in Ethiopia, by Donald Johanson and his colleague Maurice Taieb. She was classified as Australopithecus afarensis.Donald Johanson and others have suggested that Lucy had been living in a mosaic environment (forests, grasslands, lakes). However, the fossil of Lucy was found next to crocodile and turtle eggs and crab claws (Johanson & Taieb 1976).

Today the excavation site lies in a dessert, but 3, 2 million years ago the area were green and flourishing. Many scientists have suggested that Lucy fell in to a lake after she died – but perhaps lake margins was the biotope she preferred? Probably she was actually feeding from the lake.

Throughout the years, the so called Aquatic Ape Theory has been ridiculed – even if the most famous fossil was found next to crocodile eggs and crab claws.

However, the distinct adaptation to a water-based lifestyle took place later. Homo Erectus was probably much more adapted to an littoral environment than her Australopithecine forefathers – as a swimmer and free-diver (see earlier posts).

In the National Museum of Ethiopia you can also find see the skulls of Omo 1 and Omo 2, the oldest fossils of Homo Sapiens ever found. They are estimated to be around 190 000 years old. Today, the Omo Valley of Ethiopia is one of the most unique places on earth because of the wide variety of people.

Between 8th-10th on May researchers from all over the world gathered in London, presenting new research on human evolution, health and migration – with focus on the so called waterside theory. During the conference we could hear about swimming babies, water births, free diving, indigenous diving, underwater vision, surfer’s ear, coastal migration, bipedalism, aquatic mammals and much more.

The Aquatic Ape Theory has changed since it was first publicized by Alister Hardy and Elaine Morgan. Initially most proponents suggested that human ancestors spent a period of time on the coastlines after the separation from the forefather of the chimpanzee (5-7 million years ago), and then left for land. But nowadays many of the leading waterside scientists suggest that the evolution to a marine environment continued. 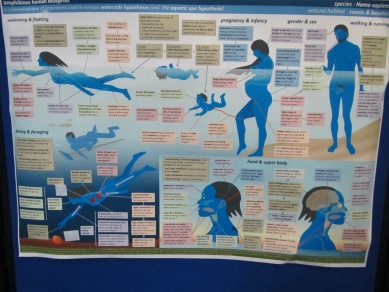 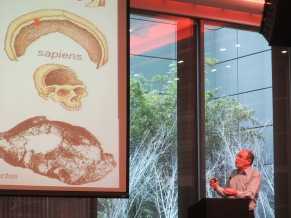 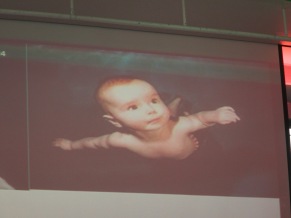 Marc Verhaegen – one of the organizers of the conference – presented a controversial idea that Homo Erectus likely were shallow water divers. As a matter of fact their migration out of Africa was made exclusively along coastlines or rivers, and Homo Erectus had much larger brains and skulls than their predecessors (among many marine animals big skulls are equivalent to shallow diving). According to Verhaegen, Homo Erectus were much more adapted to a marine environment than for example Lucy and her species Australopithecus Afarensis. It is now clear that our big brains and sinuses as well as our voluntarily breath control evolved during Homo Erectus time on earth – which is highly likeable due to a rich intake of marine food and much time spent in water. Probably did also physiological traits as the human diving response, neonatal swimming reflexes and diving reflex evolve over time, not only during a short period of time 5-7 million years ago.

Hence, human evolution in an aquatic environment water was not only a historic incident that took place in Africa millions of years ago, but was an ongoing process throughout evolution of human beings. Our present aquatic adaptations are not remnants from an old way of living, as initially suggested by professor Alister Hardy and Elaine Morgan, but adaptations that were crucial also in the emergence of Homo Sapiens 200 000 years ago.

However, this theory is hard to accept within the anthropological community as they strongly emphasize a mosaic environment, suggesting that human beings were living in different environments throughout human history, just as we are living today. Human beings are thought to be able to live in any kind of environment and are not considered to be environmental specialists. But we can’t ignore that Homo Sapiens during most of her time as a living species has been living in an tropical environment feeding from an marine environment. As a matter of fact, we started to live on dry open spaces, like savannahs, much later.

Several newspapers wrote about the Human Evolution Conference, partly misunderstanding and misinterpreting the waterside theory. For example, Independent asked if “did humans come from the sea instead from the trees?”

Then – what can we learn from the new perspectives in the waterside theory? We have to start to accept that human beings have evolved in the same way as all other creatures – living predominantly in one habitat occupying only a small number of niches. We have not always been environmental generalists and we are still today – physiologically and biologically – much more adapted to a life along coastlines than a life on mountains or savannahs.

Declining fish stocks might give “crucial consequences for our species”

The world’s fish stocks are decreasing. It is estimateds that 90 % of all big fish are already gone. Dr. Michael Crawford, of Imperial College London, sys that “without plentiful DHA, we face a future of increased mental illness and  intellectual deterioration. We need to face up to that urgently”. Docosahexaenoic acid (DHA) is an omega-3 fatty acid found in seafood. You can find the article in Mail Online here: Early human ancestors were ‘aquatic apes’: Living in water helped us evolve big  brains and walk uprig 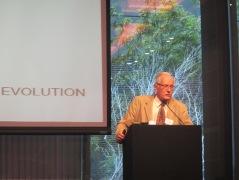 Michael Crawford – one of the speakers at the Human Evolution onference in London 8-10th of May –  states that Docosahexaenoic acid have been crucial for the development of our brains (as well as for other mammals making a living from the sea). According to Crawford we should eat 40 gram fish per day, 200 days a year.

However, by improving our mental health we will also completely undermine the marine stocks – and what will happen when we are another two billion people on the earth? Add overfishing to pollution, climate change and habitat destruction, and a picture of a system in crisis emerges.

Conference on Human Evolution in London

On May 8-10th The Royal Marsden organizes a conference on Human Evolution – Past, Present and Future in London.

In the conference, scientists will present new research and evidence highlighting the connection between humans and an aquatic lifestyle, as for example breath-hold diving, sea food/nutrition and water birth. Among the invited guests are Donald Johanson (the discoverer of Lucy) and David Attenborough (broadcaster and naturalist).

This conference clearly indicates that the Waterside-hypothesis (popularly the Aquatic Ape Theory) is getting more accepted in the scientific community. More and more scientists are now accepting that water has played an important role in human evolution, but the question is how big the aquatic impact has been.

Here you can find the program: Human Evolution Past, Present & Future – Anthropological, Medical & Nutritional Considerations.
Change in the programme for the second day: Day 2. Scars of Evolution

Visitors are welcome to admit posters on human evolution that will be presented during the conference.  Prof. Erika Schagatay at Mid-Sweden University and I will present a poster on sea nomads of Southeast Asia focusing on their underwater vision, breath-hold diving and sea harvesting skills – characteristics that demonstrate that human beings still today can be highly adapted to the sea. I have also been invited to give a speech on Bajau Laut and their adaptations to the sea. See you in London!

In the end of Decmber we visited Bajau Laut in Davao City, Philippines, where we went fishing and diving at the coast of Samal Island. The Bajau children in Davao learn how to dive in an early age. They have a superb underwater vision and learn how to fish with a harpoon in the age of ten.

The researcher Anna Gislén at Lund University has studied the underwater vision of Moken children at the southern coast of Burma. She found that they have the capacity to maximally constrict their pupils and therefore focus on small objects under water. She has also shown that all children have the potential to see clearly under water – but they will have to practise for weeks. You can find the study here: Superior Underwater Vision in a Human Population of Sea Gypsies

Here you can also see a short BBC-movie about Moken’s ability to see clearly under water:

Recently a new book on the Aquatic Ape Theory was published: Was Man more aquatic in the past? – Fifty years after Alister Hardy. A large number of scientists from different fields have contributed to the impressive book. More and more the AAT-proponents seem to agree on that a maritime lifestyle have been shaping our physical and mental characteristics all the way to Homo Sapiens, ant not only at the time of the divorce from the forefather of the chimpanzee.

I hope that this book will make anthropologists as well as other scientists and the general public more at ease with the idea of a great maritime impact on the human evolution.