Study on Sama Dilaut Divers in Philippines, Indonesia and Malaysia

In the end of 2015 I together with three companions made a scientific expedition in Southeast Asia. We visited four different Sama Dilaut communities in Philippines, Indonesia and Malaysia with the intention to meet some of the best Sama Dilaut divers. We stayed with several families, where we followed Sama Dilaut underwater fishing and made measurements in order to throw light on the physiological factors behind a diving based lifestyle.

The trip was partly funded by the Mid-Sweden University and planned by Erika Schagatay, Professor at department of Health Science at Mid-Sweden University. Other participants were Itamar Grinberg, a professional photographer and Orio Johansson, a third year Medicine student at Lund University, doing a project with Erika´s supervision.

We documented traditional Sama Dilaut fishing methods involving diving, as for example speargun fishing (”amana”), net fish drive (”ngambai”) and sea harvesting (anꞌbba”). We logged Sama Dilaut diving patterns using Ultra Sensus Loggers, in order to determine their diving depths and durations. We also measured their lung capacity in relation to height and weight, measured the size of the fishermen’s spleen´s which contract during diving and releases red blood cells, and determined their diving responses, a mammalian diving reflex that makes the pulse beats slower and redistribute blod to the more vital organs – all three important factors to become a successful diver. 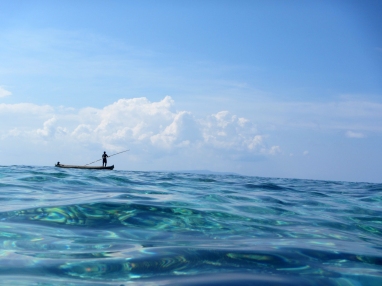 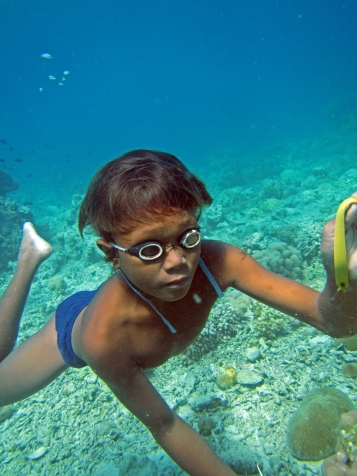 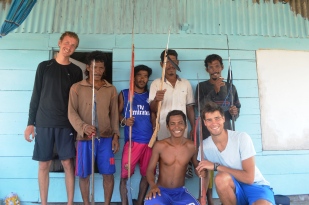 Speargun-fishing in the Gulf of Davao

In the Philippines we visited the Sama DIlaut community of Matina Aplaya in Davao City, where some fishermen still rely almost exclusively on traditional breath-hold diving speargun fishing. For four days in a row we went fishing spending hours a day at sea in the picturesque environment of the Gulf of Davao. During the fishing trips the Sama Dilaut covered large distances by boat to reach good coral reefs for fish. However, the number of big fish is reducing and it’s getting increasingly difficult to make a living from fishing, although a big catch of coral fish now gives a higher price on the market today than it did in the past. The Sama Dilaut blame local speargun fishermen using compressed air at night for the decline in fish, even though large-scale commercial fishing is also common in the area.

At the same time, the Sama Dilaut are positive to newly established protected marine areas in former fishing grounds around Davao. ”If the fish gets a chance to grow up, it will eventually leave the sanctuary and benefit our fishing”, the community leader Edjie Adjari explained.

Fishing with the TV-star Kabei and his brother

In Indonesia we visited two Sama Dilaut communities outside the southeastern coast of Sulawesi. We revisited the village of Topa, where we went diving for two days with some of the most skilled divers, and logged their dives. We did also have the opportunity to witness a traditional healing ceremony which included offerings at sea.

In Sampela, Indonesia, we met the underwater fisherman Kabei and his brother Laudo, who were recently visited by BBC:s Will Millard for the series “Hunters of the South Seas”. You can see a clip of the program here: Spear fishing with the Bajau.

We followed the brothers and three other skilled diving fishermen from the community during two days of speargun and net drive fishing. Sampela is located within the Wakatobi National Park and only traditional fishing methods are allowed here. The difference from Davao was striking – in only a few hours of speargun fishing without moving anchorage the five fishermen caught more than 30 kg of coral fish. In the reef closest to the village, Kabei even managed to find two lobsters.

However, also in Sampela fish is on the decline and both an increasing pressure from commercial fishing boats and a rise in sea temperature are major threats. According to our host Pondang it is also common that fishermen from the village migrate to Johor or Ambon, where price for fish is higher. ”In Sampela the price for fish is still very low but the cost of staple food as cassava, rice and water increase”, Pondang explained. In Sampela we also went sea harvesting for tripang, sea urchins, clams and other types of shellfish with Sama Dilaut women and in one hour of diving they got a substantial catch. However, on the market in Mola, located in the biggest island Wakatobi, we concluded that the worth of the women’s catch was not more than a few dollars.

In Semporna, Malaysia, we tried to come in contact with the world known free diver Sulbin who walks on the seafloor in another BBC production, Sea Bed Hunting On One Breath – Human Planet. However, he and other stateless people from the famous tourist island of Mabul had left for Kota Kinabalu for seasonal work. Luckily, we came in touch with other Sama divers, originating from the places as Sulbin, Siasi in the Philippines, and followed them fishing to Omadal island where fishing was good.

In Semporna many Sama Dilaut are still living their entire lives on traditional house boats. Thanks to marine sanctuaries and a strong marine tourism fish is still plenty in the region. However, only the coral reefs of Sipadan have recovered to close to what they used to be before the introduction of new, destructive fishing methods mainly in the early 1970’s (Sather 1997: 119). The traditional fishing methods used by the Sama Dilaut are more sustainable, as mainly the big fish are caught.

Preliminary Findings from the Expedition

The preliminary findings from our expedition is that Sama Dilaut fishermen regularly stay more than 50 % of their time submerged while spearfishing. A typical diving shift lasts for 2-3 hours and three such shifts can be carried out during one day. The best fishermen have an underwater bottom time on up to 60 % – as we also have concluded in earlier studies. The summarized findings from our expedition, including findings on lung capacity, the size of the spleen and the diving response, will be published later.

This entry was posted on January 1, 2016 by Erik Abrahamsson. It was filed under Uncategorized .