676 Sama Dilaut have been put in a camp for illegal fishermen in Tanjung Batu in Indonesia. They came in their houseboats from Semporna, from where thay had been chased away by the Malaysian authorities because they have no legal documents and are thought to distrurb the tourists.

At the same time, the newly elected government in Indonesia wants to stop illegal fishermen and they have made several raids in the ocean outside of Kalimantan where hundreds of boats have been seized (among them the Sama houseboats).

The Sama Dilaut were initially supposed to be released and sent back to Malaysian waters on December 17 and, but Malaysia and Indonesia are still arguing about who’s responsibility it is to handle the problem. As most Sama Dilaut are stateless no one wants to take the responsibility. Sama nomads are stuck between two national states – even if they have moved into these waters for centuries

Berau Post and a Swedish newspaper, Sydsvenskan, have reported from the incident but others seem to be silent. They have been in the camp for over a month. 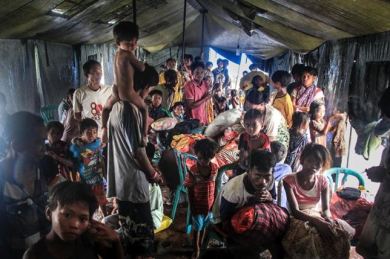 This entry was posted on December 26, 2014 by Erik Abrahamsson. It was filed under Uncategorized .