Badjao have mastered the seas of Southeast Asia for centuries. They have been known as Sama Dilaut – the people that lives on boats. Historically they have been famous pearl divers and fishermen, and they could navigate over vast distances.

Today – on the other hand – they are seen the lowest people of all, specially in the Philippines. They are seen as uneducated (which they are), uncivilized, dirty and lazy. In many part of the Philippines, Badjao have become beggars, due to reduced fish levels and conflicts in the Sulu Sea.

But Badjao don’t seem to mind about the discrimination. They are still proud and know their traditions: they have other skills, other conceptions and other motives in life. Unlike many other indigenous tribes in the Philippines, Malaysia and Indonesia they preserve their language and traditions, and no not suffer from social problems. 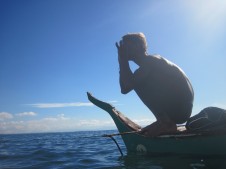 This entry was posted on March 1, 2011 by Erik Abrahamsson. It was filed under Bajau Laut .